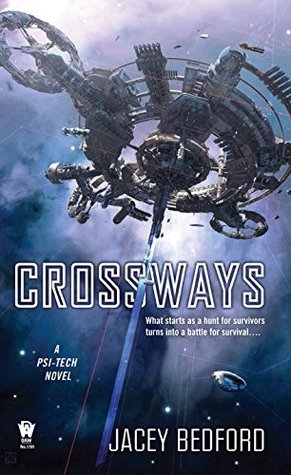 Admin - Jacey Bedford is an English writer who is published by DAW in the USA. She lives and works behind a desk in Pennine Yorkshire. She's had stories published on both sides of the Atlantic. Her first two novels, Empire of Dust and Crossways are science fiction (space opera) and follow on from each other in the Psi-Tech series. (There will be a third Psi-Tech book, Nimbus in late 2017.) Winterwood, a historical fantasy came out in February 2016. Set in 1800, it has a cross-dressing privateer captain, the jealous ghost of her dead husband, and a sexy wolf shapechanger. A sequel, Silverwolf, follows in January 2017.Jacey is secretary of the UK Milford Writers' Conference, a peer-to-peer workshopping week for published SF writers. She also hosts Northwrite SF, a critique group based in Yorkshire. She's been a librarian, a postmistress and member of internationally touring a cappella trio, Artisan (and still occasionally is for reunion gigs). When not writing she arranges UK gigs for folk artis...