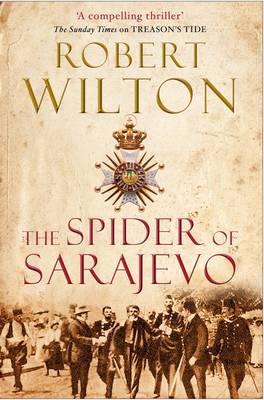 The Spider of Sarajevo (Archives of the Comptrollerate-General for Scrutiny and Survey, #3) Reviews

Books Related with The Spider of Sarajevo (Archives of the Comptrollerate-General for Scrutiny and Survey, #3) by Admin

Admin - Out now! The 'rare, clever treat' that is 'Treason's Spring'Robert Wilton worked in a number of British Government Departments, including a stint as Private Secretary to three successive UK Secretaries of State for Defence. He was advisor to the Prime Minister of Kosovo in the period leading to the country's independence, and now helps to run an international human rights mission in Albania. He's co-founder of The Ideas Partnership, a charity stimulating and supporting projects in education, culture and the environment. His new historical thriller 'Treason's Spring' is out imminently. It's a prequel to 'Treason's Tide' (hb 'The Emperor's Gold'), which was an historical fiction Number One, one of Waterstone's 'best new debut novels', and won the Historical Writers' Association/Goldsboro Crown for best debut. 'Sensational great, intelligent, fun' (Time Out) ' and 'Literary gold superbly satisfyingautifully written, wonderfully clever' (Daily Telegraph), it was written in various odd bit...