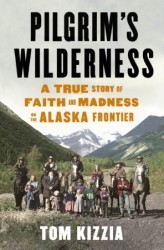 Admin - Tom Kizzia traveled widely in rural Alaska as a reporter for the Anchorage Daily News. He has written for The New Yorker and The Washington Post and been featured on CNN. Tom is a former Knight Journalism Fellow at Stanford University and a graduate of Hampshire College. His stories about the Pilgrim Family won a President's Award from McClatchy Newspapers. His first book, The Wake of the Unseen Object, was named one of the best all-time non-fiction books about Alaska by the state historical society. He lives in Homer, Alaska....